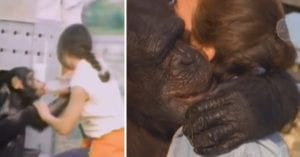 One of the hardest parts of life is letting go. Letting go of old friends, past lovers, the town we grew up in, a job we love, our first car, it’s all tough. While letting go can also be a good thing, saying goodbye will always be difficult, even if it’s just temporary.

23-year-old graduate student, Linda Koebner, realized how hard letting go was when she had to say goodbye to her current job. After spending four years working closely with three rescued chimpanzees as a behavioral researcher, the decision wasn’t easy. Regardless, Koebner knew her career had to make a shift.

Not only did she have to leave behind a job, but she also had to leave behind three furry friends. After spending quite some time with them, Koebner grew attached to the chimpanzees as they did to her. After all, Koebner watched the three chimps go from moody and unable to leave their cages, to loving and well-acclimated to their new Florida environment. They impacted one another’s lives.

18 years later, however, Koebner received the opportunity to reunite with Doll and Swing at the sanctuary. To forever capture the emotional event, she was also accompanied by a professional camera crew during the reunion.

In the video, Koebner calls out, “Remember me?” to the chimpanzees. At first, they appear a little perplexed. As Koebner inches closer, it’s clear Swing recognizes her right away, flashing a big grin and reaching in for a hug. Doll too recognizes Koebner, shyly wrapping her arm around her. Seeing their emotional interactions makes me feel right at home!

To think, without Koebner’s help, the chimps may not have the quality of life that they have today. It’s clear that Koebner has made a dramatic impact on their lives. Thanks to her success in helping Sparky, Doll, and Swing, the sanctuary has since taken in over 30 other chimps.

“Chimpanzees have provided us with so much in this world. So much knowledge about ourselves, about our social lives, about our dispositions,” Koebner says.

It’s clear to see how much passion Koebner still has for her fellow chimps!

“My dream is to replicate, even on a grander scale, what we were able to do for the chimps that came to Lion Country with us,” she continues, “I just hope that this is a model and that we can give them the respect and the freedom to live out their lives at least together.”

The reunion will melt your heart! Click below to watch it.