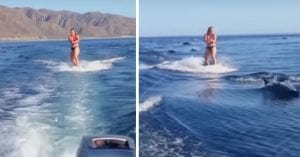 We all know the potential dangers of the ocean. From rambunctious waves to hungry sharks, these are things we’ll always continue to be on the lookout for whenever we’re in a salty body of water. Safety will continue to be important no matter how old we are.

If the ocean poses danger, though, why do we continue to visit? There are two main reasons for this. For one, our love for the ocean overpowers our fears of it. Secondly, we can’t constantly let fear tell us what to do and stop us from living life. After all, the ocean is generally a very safe place, with the exception of some pretty gnarly sunburns if you don’t adequately protect your skin. That said, we don’t have a lot to lose by enjoying the beauty of the sea.

For one woman, who’s featured in the video at the end of this article, she decided to set her fears of the ocean aside and go wakeboarding with her boyfriend, Wyatt Miller.

In the footage, the woman seems to be having a blast wakeboarding on the smooth waters of the Gulf of California, also known as the Sea of Cortez. Wyatt, too, seems to be having the time of his life, driving the speedboat pulling his wakeboarding girlfriend. From the looks of things, it appears that the couple isn’t new to water activities.

Not long into the clip, we notice a group of something approaching off into the distance. Whales? Sharks? Nope. It’s a pod of dolphins!

Then the woman wakeboarding gets the surprise of a lifetime when she looks down into the deep, blue waters, and three dolphins shoot up in unison, literally just a few feet away from her! As the rest of the dolphin group gets closer, more start swimming alongside the woman. What an unexpected treat!

Fortunately, dolphins are harmless to humans. They are one of the sweetest creatures of the deep blue sea.

Not only do dolphins enjoy the company of humans, but they’re also attracted to boats. Sometimes, dolphins see this as an opportunity to retrieve a snack from their friendly human counterparts. Additionally, dolphins swim closeby a boat because it means getting to swim with less exertion as the wake of the boat provides power for them. Other times, dolphins chase boats because they’re in a playful or curious mood. This may partially explain why the group got so close to Wyatt and his girlfriend.

Regardless of the specific reason for the appearance of the friendly school of dolphins in the below video, there’s no doubt that it’s something to remember.

In fact, Wyatt also mentions that this experience made for one of his top three afternoons! That’s pretty impressive.

Check out the footage below for yourself!