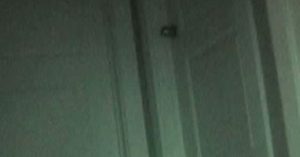 Imagine a haunted house. Every night a little girl goes to sleep, snuggled safely in her bed, surrounded by her stuffed toys. As she sleeps peacefully, the monster under the bed comes alive, slithers out in to the dark room, and snatches away her favorite Pillow Pet. In the morning, the toy is gone, stolen by a monster and never to be seen again. This is NOT that story. Rather, this is a hilarious video of a sneaky little boy, taken by clever parents on a hidden camera. [googlead]The ‘Bedroom Bandit’ is not only a little MacGyver, using improvised tools to open a locked door; his plan is well thought out and perfectly executed. He has the stealth of a tiny Ninja, sneaking in and out without a sound. The background music only adds to the hilarity. This little boy had me laughing out loud, and personally, I think he deserves to keep the toy for all of his hard work.